The Ford Thunderbird was manufactured by Ford Motor Company in the United States over eleven model generations from 1955 through 2005. When introduced, it created the market niche eventually known as the personal luxury car.

The Ford Thunderbird began life in February 1953 in direct response to Chevrolet's new sports car, the Corvette, which was publicly unveiled in prototype form just a month before. Under rapid development, the Thunderbird went from idea to prototype in about a year, being unveiled to the public at the Detroit Auto Show on February 20, 1954. Like the Corvette, the Thunderbird had a two-seat coupe/convertible layout. Production of the Thunderbird began later on in 1954 on September 9 with the car beginning sales as a 1955 model on October 22, 1954. Though sharing some design characteristics with other Fords of the time, such as single, circular headlamps and tail lamps and modest tail fins, the Thunderbird was sleeker and more athletic in shape, and had features like a hood scoop and a 150 mph speedometer hinting a higher performance nature that other Fords didn't possess. Mechanically though, the Thunderbird could trace its roots to other mainstream Fords. The Thunderbird's 102.0 inches wheelbase frame was mostly a shortened version of that used in other Fords while the car's standard 292 cu in (4.8 L) Y-Block V8 came from Ford's Mercury division.

Though inspired by, and positioned directly against, the Corvette, Ford billed the Thunderbird as a personal luxury car, putting a greater emphasis on the car's comfort and convenience features rather than its inherent sportiness. Designations aside, the Thunderbird sold exceptionally well in its first year. In fact, the Thunderbird outsold the Corvette by more than 23-to-one for 1955 with 16,155 Thunderbirds sold against 700 Corvettes 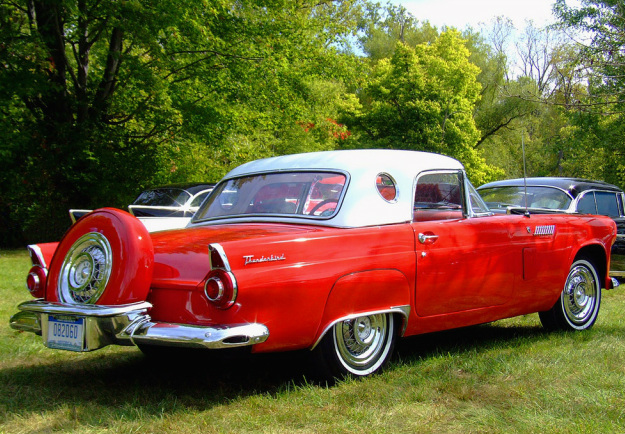 With the Thunderbird considered a success, few changes were made to the car for 1956. The most notable change was moving the spare tire to a continental-style rear bumper in order to make more storage room in the trunk, and an optional porthole in the removable roof was offered and often selected by buyers. However, the addition of the weight at the rear caused steering issues. Among the few other changes were new paint colors, the addition of circular porthole windows as standard in the fiberglass roof to improve rearward visibility, and a 312 cu in (5.1 L) Y-block V8 making 215 horsepower when mated to a 3-speed manual transmission or 225 horsepower when mated to a Ford-O-Matic 2-speed automatic transmission; this transmission featured a "low gear", which was accessible only via the gear selector. When in "Drive", it was a 2-speed automatic transmission (similar to Chevrolet's Powerglide). Low gear could also be accessed with wide open throttle. 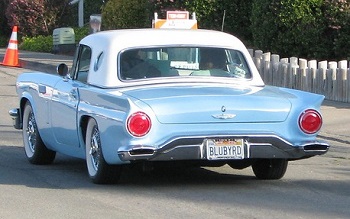 The Thunderbird was revised for 1957 with a reshaped front bumper, a larger grille and tailfins, and larger tail lamps. The instrument panel was heavily re-styled with round gauges in a single pod, and the rear of the car was lenghthened, allowing the spare tire to be positioned back in the trunk. The 312 cu in (5.1 L) V8 became the Thunderbird's standard engine, and now produced 245 horsepower. Other, even more powerful versions of the 312 cu in V8 were available including one with two four-barrel Holley carburetors and another with a Paxton supercharger delivering 300 horsepower. Though Ford was pleased to see sales of the Thunderbird rise to a record-breaking 21,380 units for 1957, company executives felt the car could do even better, leading to a substantial redesign of the car for 1958. This was the end of the Little Bird era.

Although the Thunderbird had been considered a rousing success, Ford executives—particularly Robert McNamara – felt that the car's position as a two-seater restricted its sales potential. As a result, the car was redesigned as a four-seater for 1958. Though retaining a design as a two-door hardtop coupe/convertible, the new Thunderbird was considerably larger than the previous generation, with a longer 113.0 inches (2,870 mm) wheelbase to accommodate the new back seat. The increased size also increased the car's weight significantly by close to 1,000 pounds (454 kg). Along with a new, more rigid unibody construction was new styling, including dual headlights (for a total of four), more prominent tail fins, a bolder chrome grille, and a larger, though non-functional, hood scoop. Powering the Thunderbird was a new, 300 horsepower 352 cu in (5.8 L) FE V8, available with a 3-speed manual or automatic transmissions.

With 37,892 sold in 1958—outselling the previous model year by well over 16,000 units—the new Thunderbird began a sales momentum previously unseen with the car. It was also history-making, becoming the first individual model line (as opposed to an entire company) to earn Motor Trend "Car of the Year" honors. With little more than a new grille and a newly optional, 350 horsepower (260 kW) 430 cu in (7.0 L) MEL V8 for 1959, sales climbed even higher to 67,456. For 1960, the Thunderbird was given another new grille and other minor stylistic changes along with a newly optional manually operated sunroof for hardtop models. Dual-unit round taillights from 1958 to 1959 were changed to triple-units after the fashion of the Chevrolet Impala. Customers continued to approve of the car as it broke sales records yet again with 92,843 sold for 1960. In spite of this success, Ford went ahead with a redesign for the Thunderbird to debut in 1961.

The Thunderbird was redesigned for 1961 with sleeker styling that gave the car a distinctively bullet-like appearance. A new engine, the 390 cu in (6.4 L) FE V8, was the standard and only engine initially offered in the Thunderbird. The V8 produced 300 horsepower and was mated to a 3-speed automatic transmission. The new Thunderbird was immediately well received with 73,051 sold for 1961. The car was 1961's Indianapolis 500 pace car and was featured prominently in US President John F. Kennedy's inaugural parade, probably helped along by the appointment of Ford executive Robert McNamara as Secretary of Defense.

A vinyl-roofed Landau option with simulated S-bars was added to the Thunderbird for 1962 as was a Sports Roadster package for convertible models. The Sports Roadster included 48-spoke Kelsey Hayes-designed wire wheels and a special fiberglass tonneau cover for the rear seats which gave the car the appearance of a two-seat roadster like the original Thunderbird. The Sports Roadster package was slow-selling due the high price of the package and complexity of the tonneau cover, resulting in few Thunderbirds being equipped with it. Newly optional for 1962 was an upgraded version of the 390 cu in (6.4 L) V8 called the "M-Code" (a nickname used in reference to the letter M used as the engine code in the VIN in cars so equipped). The M-Code version of the 390 cu in (6.4 L) V8 was equipped with three two-barrel Holley carburetors and could produce 340 horsepower. M-Code V8 Thunderbirds are exceptionally rare with only 200 being sold between 1962 and 1963. For 1963 only, Y-code cars could come equipped with the same 390 cubic inch V-8 also equipped by the factory with tri-power carburetors only if the buyer desired air conditioning.

Few other changes were made to the Thunderbird for 1963 as Ford prepared to introduce a new version for 1964. A horizontal styling line was added that ran from the point where bumper and fender meet back through the door and angled down. Small diagonal chrome bars were added in this area on the door. Alternators rather than generators were a new feature on all 1963 Thunderbirds. 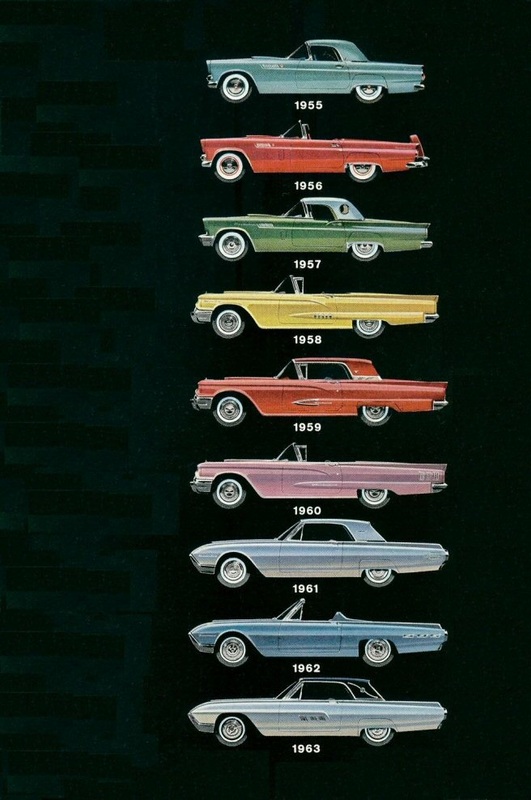 For 1964 the Thunderbird was restyled in favor of a more squared-off appearance, which was mostly evident when viewing the car from the side or rear. Hinting at its roots in the previous generation Thunderbird that it evolved from, the new model retained a similar grille design with dual headlights and a 113.2 inches wheelbase. As before, the new Thunderbird continued to be offered in hardtop, convertible, and Landau versions. The 300 horsepower 390 cu in (6.4 L) FE V8 continued as the standard engine for the Thunderbird. It was paired with a 3-speed automatic transmission. For 1965, sequential turn signals were added, flashing the individual segments of the broad, horizontal tail lights in sequences from inside to outside to indicate a turn. Also new for 1965 were standard front disc brakes, and doubled sided keys.

Even though it was the last year of the generation, 1966 saw a stylistic revision for the Thunderbird highlighted by a new egg-crate style grille with a large Thunderbird emblem at its center and a new rear fascia with the brake lights restyled to appear as one unit. Engine choices were also revised for 1966. The standard 390 cu in (6.4 L) V8 equipped with a single four-barrel carburetor produced 315 horsepower. Newly optional and taking the top position for performance was a 345 horsepower 428 cu in (7.0 L) FE V8. The 428 cost only $86 over the base engine, and was a popular option

The Thunderbird's fifth generation brought the second major change in the car's design direction since its debut in 1955. From 1958 to 1966, the Thunderbird had remained fundamentally the same in concept as a sporty two-door coupe/convertible with two rows of seating. However, the introduction of the Ford Mustang in early 1964 had created a challenge to the Thunderbird's market positioning for it, like the Thunderbird, was also a two-door coupe/convertible with two rows of seating. Where the Mustang had an advantage was in the point that it was substantially cheaper. To prevent overlap between the two cars, Ford's response was to move the Thunderbird upmarket. The result, introduced for 1967, was a larger Thunderbird with luxury appointments more in line with a Lincoln.

The new Thunderbird abandoned unibody construction in favor of a body-on-frame construction with sophisticated rubber mountings between the body and frame to reduce noise and vibration. A pair of significant departures from the previous generation Thunderbird was the elimination of a convertible model and the addition a four-door model, which used suicide doors for rear seat access. The available four-door design would remain a unique feature to this generation as it was not carried on after 1971. One of the most noticeable design elements of the fifth generation Thunderbird was the gaping, fighter jet-inspired grille opening that incorporated hidden headlights.

The 1970 Thunderbird continued with the same platform and many of the same parts and styling cues used in the 1967 to 1969 models, including the sequential turn signals incorporated into the full panel tail lights in the rear of the vehicle. The most noticeable change was in the front fascia where there was now a large prominent projection resembling a bird or eagle's beak that was in line with long angular lines in the hood. Semon "Bunkie" Knudsen, the former GM man now President of Ford, is said to be responsible for this dramatic change. The T-bird was offered in coupe or sports-back models for these two years, the latter being a further distinction from the '67 to '69 models.

In 1971, Neiman Marcus offered "his and hers" Thunderbirds in its 1970 catalog, with telephones, tape recorders and other niceties. Sold only as a pair, they retailed for a total of $25,000 USD. The 1971 Thunderbird was mostly a carry-over from the 1970 model as Ford prepared to release a new, larger Thunderbird for 1972. It was also the last year to offer a four-door